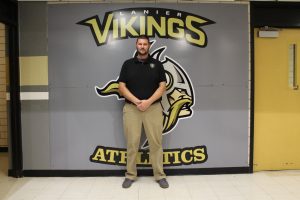 Justin Marlin is a first-year coach at Lanier High School.  He spent two seasons as JV Head Coach and Varsity Assistant at Stony Point High School in Round Rock.  He also holds a National E Coaching License from US Soccer and has enjoyed coaching his daughters 4 and 5-year-old team for the last few seasons.

Currently, Coach Marlin teaches World Geography, but has taught many other subjects in Social Studies, and also spent several years in Special Education.  He earned his BA in History from the University of Texas, and his Master’s Degree in Public Administration from Texas State University. Coach Marlin enjoys traveling, camping, and almost all sports, but mostly spending time with his two daughters, Amelia and Peyton, and his wife Amanda.